Saturday May 25th at the Eganville Arena 11am-11pm

We love being a part of local events, it is such a great opportunity for us to help out local community groups and charities and just get out and be part of the community we love.

We are so excited to be part of KatieBears 2nd Annual Funday and really excited about offering a photo booth.  We will have fun props for folks to dress up if they wish.  Photos will be printed on site for only $5.00 each and part of the proceeds will be donated back to KatieBears.  So get ready to smile!

There are a whole lot of other events and activities for everyone just have a look at the list below!
We hope to see you all there!

If you are interested in participating in KatieBear Idol or as a vendor please visit the KatieBear’s Facebook or Event page for more info or to send them a message, there is still room for all types of vendors.

The Friends of the Library hosted their annual fundraising Dinner for the BUPL (Bonnechere Union Public Library) on April 27 2013. This year’s theme was “Under the Sea”

This is the first time we were asked to participate and the evening was really fun! The Legion was transformed in to an under water oasis  and looked fantastic. Some of the attendees wore costumes and the decorations which was the work of a team of helpers were really AMAZING!

The Greek God Poseidon who was portrayed by Chris Hinsperger owner of the Bonnechere Caves made and appearance and presided over the evening…(Great Job Chris!)

The decorations were AMAZING!

George from Frisco’s was on hand serving freshly sautéed shrimp along with a selection of dishes and salads that were made by the Friend of the Library Volunteers.  It was obvious the food was enjoyed by all! 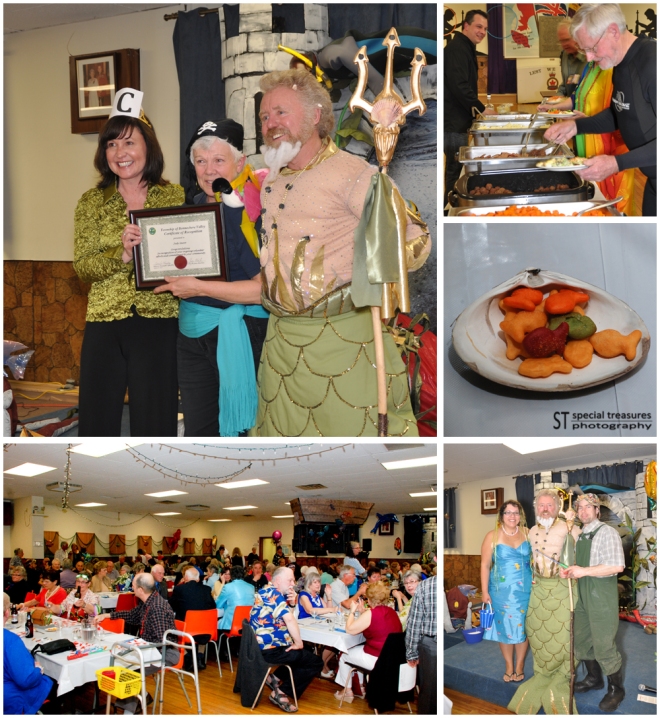 The annual fundraising dinner hosted by The Friends of the Library to support the Bonnechere Union Public Library was enjoyed by everyone who attended.

Bonnechere Valley Township Mayor Jennifer Murphy (whose costume was an adorable tiara with the letter “C” …get it?) presented Judy Sauvé with a volunteer award for all her hard work with the many local organizations she is proud to be part of.  Judy accepted the award to a standing ovation!  Now that is Valley Pride!

The evening entertainment was provided by The Red Shoes.

Both wearing their cool Red Shoes, they performed a great selection of Under the Sea music.

There were games to entertain guests with prizes, and a silent auction.  We enjoyed ourselves and so did everyone we spoke with.  If you have not attended the annual dinner before we recommend you plan on attending next year.  It is not only a fun evening it is really a great cause  to support our local library

I know we can’t wait to see the decorations next year, we are told they get better every year.